The iron that built the amps.

To fully understand valve amps for the 60' and 70's you need to know a bit about the tools they were constructed with, and the main one is the soldering iron.

Early on about the only electric soldering irons you could get were hulking 100 watt-plus monsters like the Berko, fitted with a 'fine' half-inch (1cm) tip. Irons like these were common on electrical production lines and in plumbers toolkits.

Then the Scope appeared. Instead of a heating coil it used a very low voltage transformer, nominally 3.3VAC at 30 amps intermittant, to heat a carbon element that pressed against the back of the unclad copper tip. 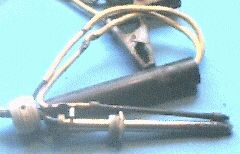 This produced an iron with a very different characteristic. Pressing the slide ring pushed the carbon element forward into contact with the back of the tip, completing the circuit and directly heating the copper tip.

But using a Scope was an art that had to be learned. You learned to pre-heat the iron with one hand while you finished placing the component with the other, doing joints in groups, and knowing when to let go of the ring.

To get the rapid heat-up down to a few seconds the iron actually had a huge amount of power, and if you kept the boot in the whole end would rapidly glow red-hot. I've seen techs use them as lighters.

This huge power reserve came in really handy soldering earth wires to a chassis or large cap lugs, or even pot lugs.

But it was also possible to destroy the tip, badly oxidise and de-tin it, and even melt the cable if you just held it on. The full range of available tips is the snowplough screwed into the end of the barrel.

Modern light-duty irons are fine for PCB's and modern fine assemblies but valve amp joints are normally on bigger lugs that suck more heat from your iron, dropping its temperature until solder won't flow well.

One of the tricks to avoiding cold solder joints is to use a high enough power iron with sufficient heat storage that will rapidly heat the joint to the required temperature without the heat having time to flow to everything else causing damage.

An iron with high AC current flowing through the tip was not suited to solid-state, and the emergence of CMOS was the last nail in the Scope coffin.

My old Scope is dead, but I have a high-power (80 watt) iron to use when required for heavier work. In the end you get a better job than struggling on with a lighter iron.

As far as I know Scope only made a small range of products, the normal Scope, a MiniScope iron, and a spark engraver.

The MiniScope was designed to meet the growing need for a finer iron for PCB work, but the change in design from an actuating ring to a lever that melted was its downfall.

The engraver was similarly basic, a solenoid with a pointed plunger. With the work connected to one side of the transformer the engraver acted like a buzzer on the surface, drawing small arcs which marked the metal. Very Hi-Tech we were in those days.

Adcola's and later Wella's replaced them in workshops in the swing to solid-state.

Its important for a joint to be clean of oxidation before soldering is attempted. With older components I find a quick scrub with a small old bronze brush helps to expose a fresh surface for the solder to bond with and 'wet'.

Clean the tip of the iron on a moist high-temp sponge or wad of damp toweling before using the iron.

Put a dab of fresh solder on the tip of the iron just as you make the joint. This will couple the heat of the iron to the joint better than the surface of the tip alone, and also freshly fluxes the tip.

Heat the joint with the iron, melt the solder with the joint.

Don't carry solder to the joint on the tip of the iron - most of the flux burns off before you get there, and its object is to remove the surface oxides.

Strike excess solder off the tip before you put the iron down. This slows erosion of the tip by solder leaching.

I have found a solder-sucker invaluable for de-soldering, but have found the short ones pretty useless. Not enough slurp. The one I use is a 10-inch EDSYN with teflon (PTFE) tip. Be careful cleaning any solder-sucker as they produce a fine lead-tin dust.

Some people love solder-wick, but I just don't get it, sorry. It hasn't got any slurp. The original stuff came on a small PVC reel with a closed rim that melted, which I thought particularly bright of the maker, however it's not true that they also made PVC soldering iron stands and cardboard hot water bottles.

In many amps with tagstrips you will notice the application of another rule; don't depend on solder for physical strength. All joints should be made physically secure before they are soldered, making the electrical connection.

It does make them more difficult to remove but a good solder-sucker works just as well on tag joints as on a PCB, perhaps better. Joints thus exposed are then generally easy to unwrap.

For mass desoldering large PCB's such as old computer motherboards a paint-stripping hot air gun works wonders. Heat an area of the solder side then bang the board component-side down on a surface and collect what you want. Take it easy with SMD's as the hot air gun will quickly blow them right off the board.