Japanese and solid-state, but in the period and a really odd one.

Source: Tommy Buchannon has a full set and has sent in a photo to prove it.

Hey Roly , spoke to you ages ago about these amps & thought I would send you a quick pic of my collection . I also have the big Yamaha R60 rotary which is crammed full of the quirky flexion speakers , but can't find the pics of that one at the moment & the amp is in storage due to its size , 'cos I can't fit it in with everything else at home . In the pics , the amps are from left to right : TA90 ( consists of the PE100 head & the TS90 cabinet ) TA60 , TA30 & TA20 all in good nick & working . Love your site , the most informative site I've ever seen !!

{That's mainly because people like you keep sending in interesting, informative stuff -rr} 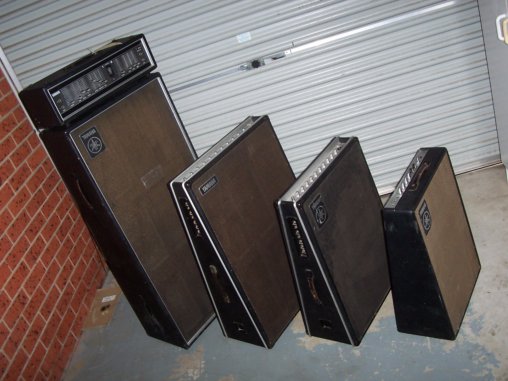 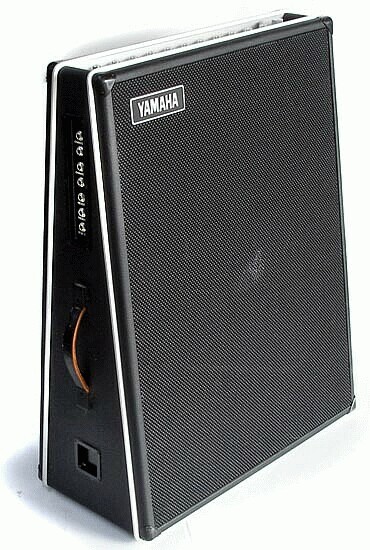 An elegant package, but a bit too different for the 70's

(see below for corrections)

Some time in the 70's Yamaha decided to have a go at the guitar amplifier market.

The result was three four solid-state offerings that have to be one of the most divergent guitar amp designs ever.

Firstly they were one of the early transistor offerings in a valve guitar world.

Since the Japanese had no track record or rep in band gear they could afford to be really imaginative, and they were.

The most striking thing about these combos was that they were tall and triangular side-on, that is deep at the bottom and shallow at the top, the frontal view giving the impression of the black monolith in the film 2001.

But the biggest difference you couldn't see, hidden behind the grille cloth.

Each of these amps used an invention of Yamaha's they called the Flexion or “Natural Sound” speaker. Fairly flat and rectangular with one end cut at an angle and an off-center well to the large voice coil. This speaker had no side suspension, the radiating plate being firmly held around the edge with the plate/cone flexing to the voicecoil - hence the “flexion” name.

The rave was that it worked like a piano soundboard giving significant colouration to the sound. This doesn't seem an unreasonable idea for keys, but a bit curious for their intended use with guitar.

These speakers were reviewed in RTV&H/EA as a component some time previously.

In their day they were expensive compared to locally built amps, solid-state, and very unconventional in both shape and speaker, so after an initial splash of interest the amps and speakers sank without trace.

I heard one once being used for guitar, a 90 watter at Melbourne Town Hall, but only remember being impressed by the look and that the sound was nothing special.

So now if you happen across something about the size of a doormat that looks like a cross between a speaker and a piano soundboard you know what you've got - a serious collectors item, because they were only a momentary flash in the pan.

Addendum: 31/12/10 I now have a Yamaha Electone console organ that turns out to have a small (6x8 inch) Flexion as it's rotating effect speaker. 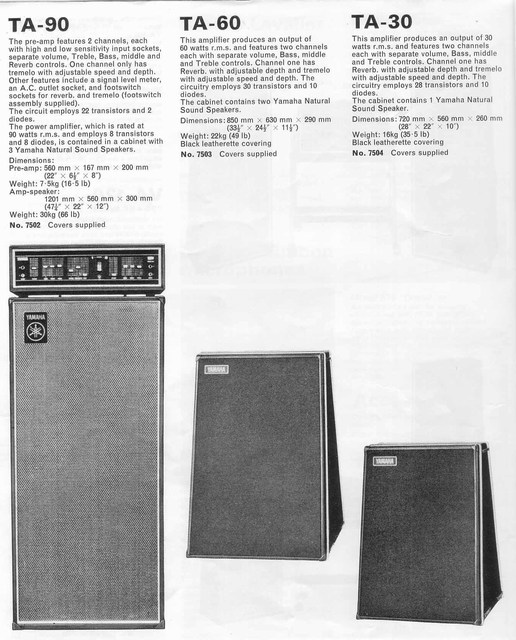 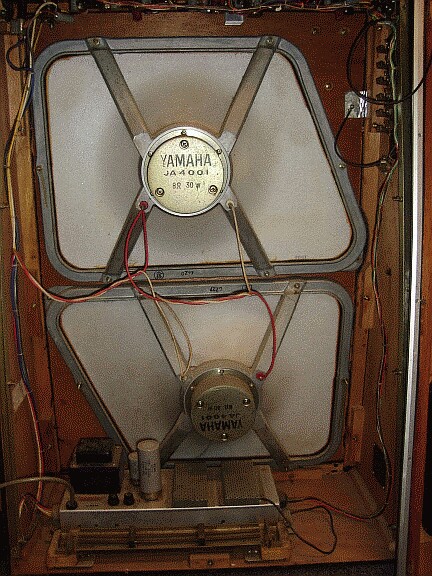 This amp does indeed sound great for clean work although I am using it in a rock band at the moment with a few pedals in front and in this role it also works well.

I get so many comments on this amp - it is a great talking point whenever I play or practise at a rehearsal space around town.

A good friend of AVA's from Vancouver Island Canada, JC Maillet, had a TA-20 in for service and took the opportunity to send this gallery. 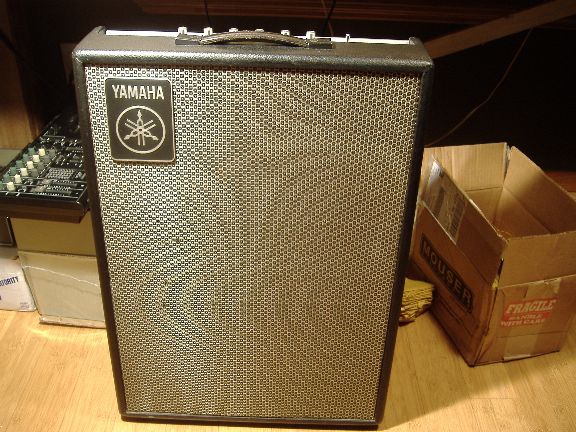 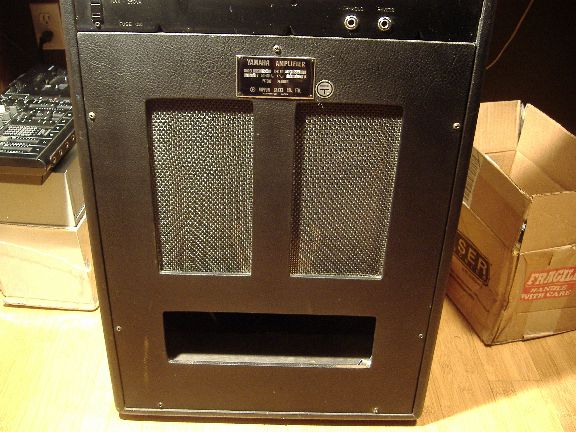 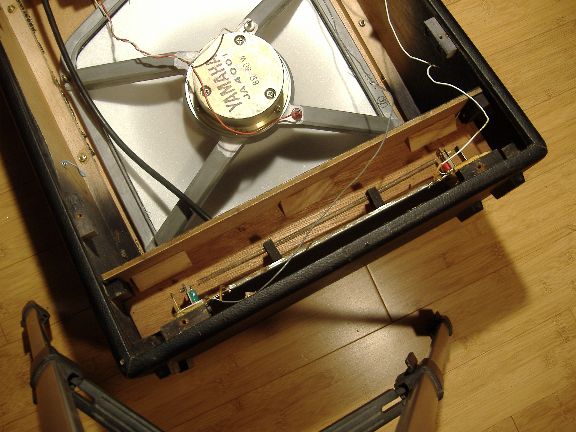 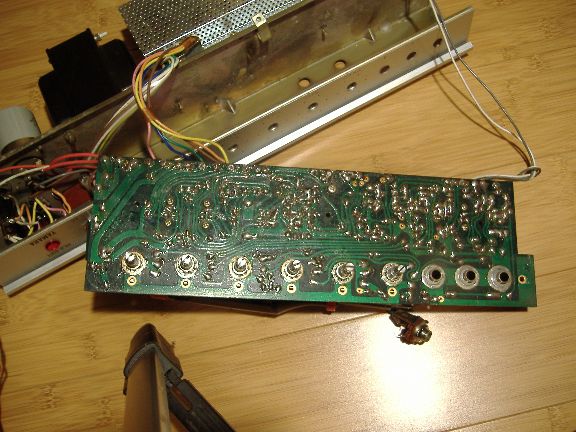 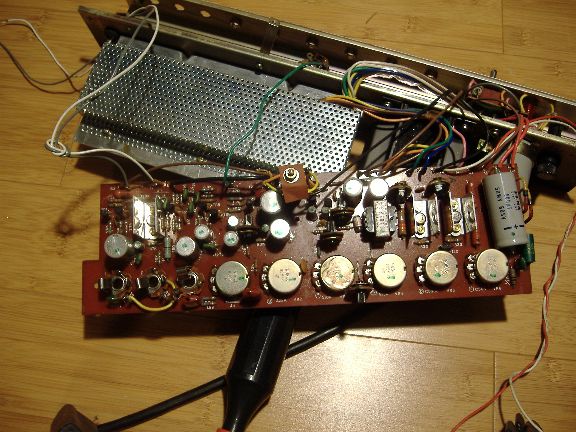 This general view shows that the board is as unconventional as the rest of the amp, which makes it a bit hard to read.

But there are some things that are apparent; the output stage is at the right hand end where the two drivers and their heatsinks can be seen. The big cap on the end will be an output coupling cap (because of the bigger cap on the chassis behind, and two diodes on the end of the PCB suggesting a simple mono-rail supply with bi-phase rectifier).

These driver stages will connect to the actual output transistors mounted under the perf metal cover, above.

The big inductor right next to the driver stages is a strong indication this amp uses transformer drive (see Playmaster 125 circuit), implying the stage before will be a Class-A power pre-driver.

The heatsink on the input (left) end could be either a regulator for preamp power, or perhaps more likely a power driver for the reverb springline.

I count six trim pots on the board. My advice is don't fiddle with them until you know exactly what each one does, either from a manual, or by circuit tracing. (and when you work it out, let us know). 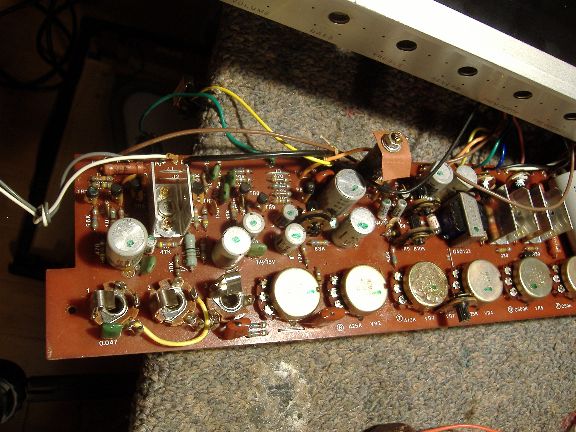 Rotating speakers are a technician's nightmare, but nothing else can quite produce that sexy sound.

The original Leslie rotating speaker spawned many imitators. Here are a couple where Yamaha have added their own inventive flare.

The original Leslie was intended for fixed installation, not portable road work. Quite a few builders, including Fender, have tried to produce various kinds of rotating speakers (or fixed speakers with rotating reflectors) in more road-worthy packages.

These tend to be cubic like this RA-50 and are therefore a bit harder to carry and pack for transport. The R-60 despite being bigger is fairly flat and a much more attractive proposition to lug and pack. 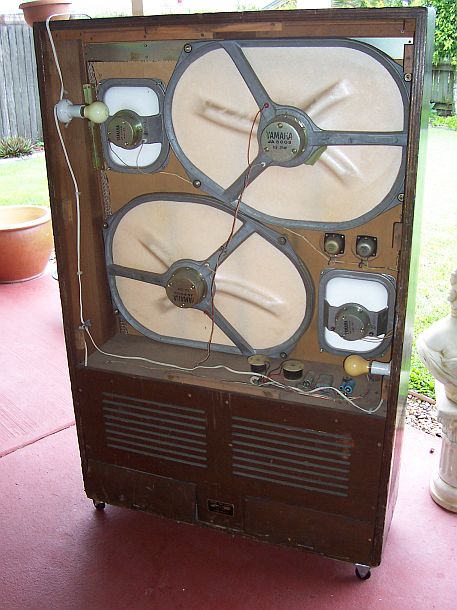